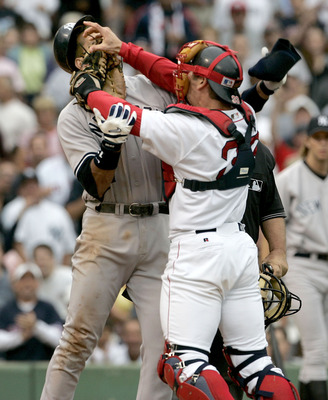 July 24, 2004 started out a normal day for most, but it was a special day for me. It was my 22nd birthday and if you know anything about me, birthdays are a huge deal to me.

The day started like any other birthday, as I received phone calls from my grandmother and aunt wishing me a happy birthday. Birthdays are very special in the Staley family as my family always takes the person celebrating out for dinner. Until this day but I couldn’t tell you where we went out to eat (thinking Bonefish Grill) or even what gifts I got. The thing about July 24, 2004 more that anything was the New York Yankees vs. Boston Red Sox game.

Non fans of the Red Sox or Yankee fans are probably saying, what was so meaningful about a mid-summer game in July? The outcome of the game and aftermath changed the history of the Boston Red Sox.

The Red Sox entered the 2004 season coming off the disappointing finish of the 2003 ALCS. Prior to the season, the Sox  attempted to trade for Texas Rangers Shortstop Alex Rodriguez , but the deal fell through when the Players Union stepped in due to agreements A-Rod would need to make in order to complete the trade. When the deal fell through, the New York Yankees swooped in and traded for the shortstop-turned-third baseman. This made an intensified a rivalry that already had gasoline and a match to it.

So on July 24, Rodriguez came to bat in the third inning (A-Rod drove in the go-ahead run in the ninth the previous night to give the Yankees the win) with the bases empty and two outs. The Yankees were already up 3-0 when pitcher   Bronson Arroyo hit A-Rod on his heavily padded elbow.

While Rodriguez walked toward first base, he yelled at Arroyo saying he was intentionally hit by the pitch among other things. Then Red Sox catcher Jason Vartiek got in the middle and punched Rodriguez in the face with his glove and both benches cleared.

A-Rod, Varitek were ejected from the game. Yankee pitcher, Tanyon Sturtze was bleeding from a cut by his ear because of the bench clearing brawl. The fight resulted in eight suspensions, but it served as a wake-up call for the Red Sox.

After the fight, the Red Sox overcame a five-run deficit to win 11-10, thanks to a walk-off home run by Bill Mueller off Mariano Rivera. This game was the moment that woke the Sox out of their mid-season slump.

Entering this game, the Boston Red Sox were trailing the Yankees in the American League East by nine-and-a-half games in the American League East and were in danger of missing the playoffs. From July 24 until the rest of the season, the Red Sox won twenty-two out of their last twenty-five games and went on to finish with 98 wins and within three games of the Yankees in the AL East. More importantly the team qualified the playoffs as an AL Wild Card. From there the Red Sox and Yankees would meet again in the ALCS and the Red Sox would defeat the Yankees 4-3 (trailed 0-3 in the series) in maybe the biggest comeback in sports history.

Some would say that the Red Sox success after July 24 was because of the trades they made. At the trading deadline, the Red Sox traded popular, but unhappy Nomar Garciaparra. The team picked up Orlando Cabrera, Doug Mientkiewicz and the man who will never have to pick up a check in Boston again, outfielder Dave Roberts. The trades had something to do with the success, but on July 24 the locker room changed from, maybe  we can beat the Yankees, to we can beat the Yankees.

When people ask me about what is most memorable birthday I’ve had, this is in my top 3. The Boston Red Sox gave me the best present any fan could want and that’s a comeback win over the New York Yankees and later on in September, a World Series Championship.