After the preliminary round of Olympic play, the United States is undefeated. They hold the number two seed in the tournament with a bye that will take them into the quarterfinals, where they will face the winner of the Czech Republic-Slovakia game. The highlight of the first three games was a big win over Russia, while the other two games were dominating wins over Slovakia and Slovenia. The U.S. definitely looks medal-worthy after the 3-0 start, but can they win gold? Let’s break it down by taking a look back on the road so far.

The Americans were favored to win against Slovakia, but they had to face one of the best defensemen in the game, Zdeno Chara, an incredibly talented goaltender in Jaroslav Halak and the Hossa brothers on offense. It wasn’t an easy task coming in, but the United States played a near-perfect game, scoring six goals in the second period in a 7-1 rout. The tone was set on both sides of the ice. Paul Stastny scored two goals and Phil Kessel recorded a goal and two assists on the offensive side. The defense clamped down on the Hossa brothers, making it easy for Jonathan Quick to dominate between the pipes. While it was a foregone conclusion by the second period that the U.S. would win handily, that kind of domination was necessary to wipe away first-game jitters allowing them to focus on playing “their” game.  A much bigger test was coming in game number two.

USA vs Russia. It was the most anticipated group stage game of the tournament by far and everyone was looking forward to watching some of the NHL’s best go at it. Russia’s powerful offense made them favorites coming into Bolshoy Ice Arena on Saturday, the fact that they had home ice advantage only helped their cause. An American win didn’t seem all too likely, but the U.S. found a way to answer time and time again in the match. When the Russians scored their first goal, it didn’t take long for the Americans to answer with the equalizer. Every punch Russia threw, with Pavel Datsyuk as the ringleader in the offensive zone, the United States was able to hang in there. Even when it looked like the U.S. had let the game slip away from their fingertips with four minutes left, the goal was disallowed due to a net off moorings, an Olympic rule different from the NHL’s. Did America get a lucky break? Absolutely, but no one in the United States was complaining. When overtime couldn’t determine a winner (thanks to another outstanding period from Jonathan Quick in net), the shootout was on in Sochi. In that shootout, T.J. Oshie went from virtually unheard-of St. Louis Blues center to American hockey hero, scoring on four of his six shootout chances to win the game for the Americans. While many were questioning coach Dan Bylsma’s decision to keep sending Oshie out there rather than sending Patrick Kane or another star forward, Oshie had a plan for every shot. It was captivating, thrilling and historic, almost like a 2014 version of the Miracle on Ice. This time, the Americans were no Cinderella. They had shown they were for real and this was no miracle.

The final game of the group stage waseven more of a foregone conclusion than the game against Slovakia. Slovenia was no match for the United States on Sunday, and the red-white-and-blue knew that. To give Quick a much-deserved break, Bylsma gave Ryan Miller a start in net, and Miller looked like the goalie seen in the 2010 Vancouver Games. Number 39 stopped 17 of 18 shots en route to a 5-1 victory. Phil Kessel provided the offense once again, scoring a natural hat trick (three consecutive goals for his team) to put himself atop the goals leaderboard and help clinch the number two seed for the Americans. Once again, the defense’s play cannot be overlooked. Not only has a defenseman scored in each of the three games, but the unit has been stellar,  allowing just four goals total in the preliminary round. It was an incredible performance with shutdown after shutdown, without that, the U.S. would not have held Russia to two goals in sixty minutes of play.

Looking ahead, the Americans appear to have great odds of at least medaling in this tournament. As long as they continue their strong play, they won’t lose to either the Czechs or Slovakians. The Czech Republic went an unimpressive 1-2 in the prelims, with their only win coming against the Latvian cellar-dwellers. Jaromir Jagr and goalie Jonas Hiller are literally the only potent players on this team, but you can’t win if you can’t get a complete team effort on offense. If pucks aren’t going into the net, as was the case against Switzerland, the Czech Republic has no shot of beating the United States. As for Slovakia, everyone saw what happened in the first game. Similar to the Czech team, they have a feeble offense seemingly incapable of putting goals on the board. They only scored two goals in the group stage and are coming off of a shutout loss themselves. The Americans will handle either quarterfinal opponent with ease. As for the semifinals, it will most likely be a 2010 gold medal game rematch with Canada. While most wanted to see that matchup in the final, that’s just the way it worked out this time around. Will the U.S. get revenge for Vancouver and beat their neighbors to the North? Or will the Canadians prevail again? Either way, the Americans will play for a medal. Obviously the objective will be to beat Crosby and company and play for the gold, but even if they lose they play for bronze.

At the beginning of the tournament I predicted a bronze medal for Team USA after a 2-1 group stage, but times have changed since then. I did not think they would beat Alexander Ovechkin, Pavel Datsyuk and the Russians, but they did. That has changed the seeding and the outlook quite a bit. Facing the Canadians would/will be a tough task, but the Americans have played more impressively than Canada has so far, and they will look to keep that momentum going into the semis. Canada struggled with Finland yesterday, their offense looked meek and not nearly as formidable. They have yet to figure out how to play together, while the U.S. seems to have it all figured out. They are playing better as a unit than any team in this tournament, even Russian commentators agree with that statement; some even said  just that on air during appearances on Olympic coverage. You could say this team is better than 2010 and that’s not a reach whatsoever. With some more magic and an ever-growing bond, this team looks golden. 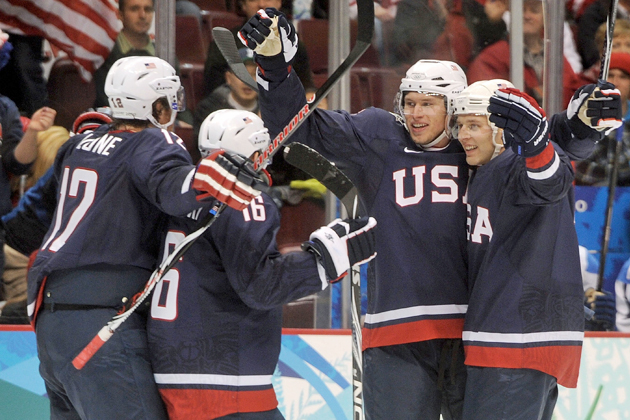