The NL Central has been a whole lot better than people thought it was going to be, they have been a ton of fun to watch.  Between the Pittsburgh-Milwaukee brawl and the stellar pitching, this division has been pretty entertaining to say the least.

The Division has baseball’s best team up to this point and no, it’s not the Cardinals, Reds, or Pirates.  It’s the Brewers,  owners of an 18-7 record.  The Brewers have been carried by their pitching with a team ERA of 2.58.  Four of their five starters have an ERA under 3.00, lead by their ace Yovani Gallardo who has an ERA of 1.42, 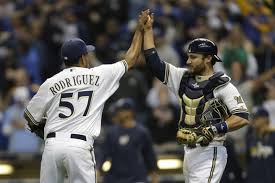 good enough for fifth in the league. All five of Gallardo’s starts have been quality starts.  The Brewers also have the league leader in saves in Francisco Rodriguez, he’s pitched 14 scoreless innings this season while recording 11 saves.

On the offensive side it’s hard to ignore Ryan Braun, he’s making his return from a suspension last season due to PED’s.  Braun has proved himself by batting .318  with 6HR and 18 RBIs, leading the Brewers in each of those categories. Milwaukee has won 7 of their last 10 heading into a three game set with the Cardinals.

The rest of the NL Central has underachieved so far this season, well not Cubs, kind of hard for them to underachieve.  The Cardinals, Reds, and Pirates (all made the playoffs last season) haven’t looked anywhere near as good as expected.

St. Louis Cardinals 14-12 (2nd place):  The Cardinals lost 3 of 4 to the Mets this week, winning just 5 of their last 8.  Adam Wainwright has looked outstanding thus far, leading the league in wins. Michael Wacha and Shelby Miller look great as well, both seem to be the real deal. The offense is off to a slow start outside of Yadier Molina and Matt Adams, Molina is batting .344 and Adams is batting .337.  Aside from those two, not much going on at the plate for the reigning NL Champs.

Cincinnati Reds 11-14 (3rd place):  As a team they’re batting just .247.  Jay Bruce has been far from himself, hitting .224 and rookie speedster Billy Hamilton is hitting .221. Hamilton has an OBP of .253, you can’t steal many bases if you’re not getting on base.  He does have nine stolen bases so far, which is pretty impressive for a young player.  The Reds pitching staff has been solid, led by Johnny Cueto and Aflredo Simon. Simon has been a very pleasant surprise.  Jonathan Broxton has also been good in filling in for Chapman, who’s close to returning.

Pittsburgh Pirates 10-16 (4th place):  Much like the Reds, the Pirates just don’t hit.  They’re hitting .221 as a team and have a team OBP of .296.  Reigning MVP Andrew McCutchen hasn’t been that bad, but after him there isn’t much production.  Pedro Alvarez is batting .172, although the power numbers aren’t bad with six homers.  The pitching staff has held it’s own, even though Francisco Liriano (their ace) is still winless at 0-3.  Gerrit Cole has looked good to open up the season and Edison Volquez is the most recent pitcher to turn his career around in Pittsburgh.  All-Star closer Jason Grilli is on the DL, Mark Melancon’s been great this year and will take over the closing role.

Chicago Cubs 8-16 (5th place):  The Cubs look like they’re in for another long season.  They’re one of just three teams who have yet to win 10 games this season.  It hasn’t been all bad news for the Cubbies though.  Starlin Castro and Anthony Rizzo, two key players to the Cubs future, have hit the ball very well and have progressed their game.  Chicago must be especially happy to see Castro batting .292 and lead the team in HR’s and RBI’s after his horrid 2013 season.  Jeff Samardzija has looked phenomenal as well.  All five of his starts have been quality starts his 1.53 ERA is a leagues best, eighth.

Written by Mark A. Reyes