As good as the offensive and defensive corps of the Los Angeles Kings and New York Rangers are, it’s the men between the pipes who will garner the most attention in these Stanley Cup Finals. Jonathan Quick and Henrik Lundqvist are two of the best in the game and their play in the postseason has backed it up.

Which goaltender will make the difference in the Finals and who’s going to win this thing? Let’s break it down!

Jonathan Quick was absolutely marvelous in the 2012 Stanley Cup Playoffs.  He posted a dominating 1.41 goals against average and .946 save percentage as his Kings defeated the New Jersey Devils in six. Quick set an NHL record with eleven consecutive road wins dating back to the 2011 postseason. It was truly a Cinderella story for the eighth-seeded Kings, and Quick’s outstanding play earned him the Conn Smythe Trophy for MVP of the playoffs.

Two years later, Quick is back in the Stanley Cup Finals. He hasn’t been as terrific in these 2014 Stanley Cup Playoffs; he has a .906 save percentage and 2.86 goals against average. It’s been rough at times, but he has made the saves when it’s mattered most, winning three game sevens on the road (the first to ever do that). Once again, the Kings are the road warriors who have had their backs against the wall every series and have managed to rise to every occasion. Their net minder is one of the keys to that resilience.

However, the best goalie in the world right now is the one who will be wearing a white jersey tonight and a blue one in Game Three, King Henrik. Henrik Lundqvist has gotten to this point with a 2.03 goals against average and a .928 save percentage. He’s shut down the high-scoring Penguins and shutout Montreal 1-0 in the deciding game of the East Finals. The Rangers don’t have the most electrifying offense to give him a big cushion back there. Instead, he has to come up huge saves time and time again to keep New York in the lead, he often does just that. He’s the best in the league at making the difficult plays look easy, the major challenges look minor. He doesn’t get too high or too low and that levelheaded nature carries on to the rest of the team. He’s a fierce competitor, but he will never lose his composure and that’s what makes him the King. The edge in goaltending goes to the New York Rangers.

We’ve broken it all down, now it’s time to pick a winner of these Stanley Cup Finals. I know I gave the Kings the edge on offense and defense, but I’m going with the blueshirts to win it all. The best goalie in the world, along with the fact that they’re due after waiting 20 years, makes the Rangers the team of destiny. New York will win it all at home in Madison Square Garden. Rangers in 6 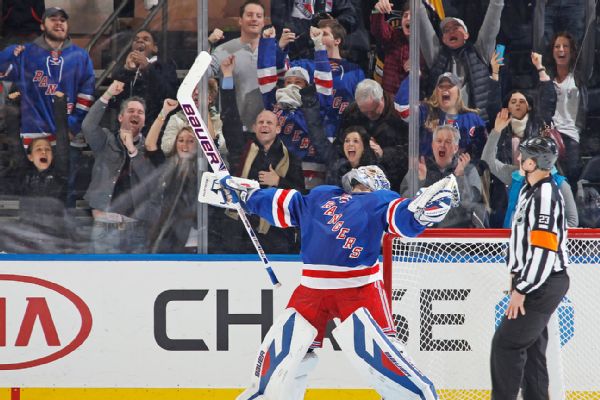