With Alabama and Blake Sims making headlines against the Florida Gators on the field, and Jameis Winston and FSU making headlines on and off the field nationally, it was probably pretty easy to forget Mississippi State vs LSU Saturday night. We’re not forgetting it now. What a performance by the Bulldogs and Dak Prescott! Their upset of LSU to end 14 years of frustration against the Bayou Bengals was the headline of the weekend, but there is plenty more to discuss about Week 4 in the SEC.

LSU is exactly what I thought they were. A pretty mediocre team. At least they were Saturday night. Even with the 3-0 record coming into the game, the Tigers were lucky to win against the only decent competition they had faced. The Wisconsin Badgers. Questions at quarterback and youth on defense came back to haunt them big time. Starting QB Anthony Jennings was ineffective and Brandon Harris came on and almost lead the Tigers back from a 24 point deficit. It remains to be seen whether Les Miles will continue with Jennings or if he’ll go with the freshman, Harris. Obviously, it looks like the smart move would be to go with Harris.Whomever the QB is, the Tigers have to get the passing game going. If they don’t defenses will continue to sell out to stop the run and make LSU beat them through the air.

As bad as LSU looked, and as close as the score turned out to be, make absolutely no mistake about it. This was a thorough beat down the Bulldogs laid down on the Tigers. They deserve every bit of the credit and notoriety they’re receiving across the nation. If you didn’t know Dak Prescott before Saturday night, you know him now. LSU fans want to forget his 268 yards passing and 105 yards rushing. Prescott, looked like a Heisman Trophy candidate as he had college football aficionados comparing him to the likes of SEC greats Cam Newton and Tim Tebow. I’m not quite ready to go that far. But, there is no doubt this kid is special. However, he was far from alone in the Bulldogs assault of LSU. Running back Josh Robinson had 197 yards on 16 rushes and a TD. Wide receiver Jameon Lewis hauled in 5 catches for 116 yards and a score. Both of these guys had fantastic evenings and look to be the skill players Dan Mullen has lacked for his offensive attack. As good as they were, it was the guys in the trenches on both sides of the ball that may have been the stars of the game. The physicality they showed seemed to shock the Tigers. They weren’t ready for it. The holes the offensive line opened up and the way they protected Prescott was remarkable. State also smothered the Tigers run game and forced the Tigers to beat them through the air. The Dogs simply came into Death Valley and dominated. Now, let’s see just how far these Dogs can actually go. Atlanta? Definitely a possibility. 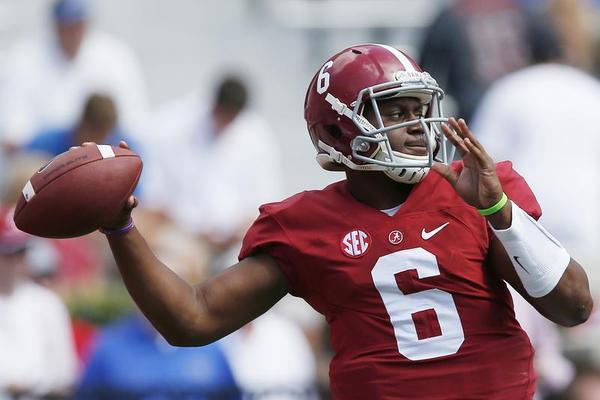 At least so far, Bama has silenced a lot of critics across the country in several ways. First of all, we’ve been dead wrong about Blake Sims. Doubting him coming into fall camp was easy if you saw him play in the spring game, or mop up duties last season. His improvement has been amazing. The critics doubted he could throw the deep ball. That question was answered on Bama’s first play from scrimmage. An 87 yard TD strike to Kenyan Drake. Part of his 272 yard passing in the first quarter. Not only did Blake throw long against the Gators, he made just about every throw you could ask him to make. Short, long, intermediate. You name it, Blake threw it.

Second of all, and probably more importantly, there was a lot of criticism over Nick Saban hiring Lane Kiffin. Many people said it wouldn’t work. Kiffin’s presence would promote problems in the program. That hasn’t been close to accurate. In fact, Sims improvement on the field clearly has to be attributed to Kiffin. Bama’s offensive playcalling is balanced, it looks crisper and seems to flow much better, despite the boat load of penalties they’ve amassed. Bama ran 87 plays against the Gators on Saturday. A stat like that has been unheard of by an Alabama offense. Ever. The run game could be more consistent. The mostly young offensive line has struggled at times to make room for the running backs, but that should come around. I’ve said all of that, and haven’t even mentioned Amari Cooper. All he did was catch 1o more passes for 201 yards. Another night at the record breaking office for Cooper.

Last and certainly not least, there were lots of questions about the secondary. With free safety Nick Perry suspended for the first half after being ejected last week for a targeting penalty, it seemed like the perfect recipe for Florida to exploit Bama’s secondary. Especially, with Demarcus Robinson showing signs that he could be the big play receiver that quarterback Jeff Driskel has lacked. Robinson, caught 2 passes for 14 yards. Enough said. Bama’s defense was great all afternoon, but you have to ask was Florida just that bad? I think it was a lot of both. On one hand, the Gators may not have scored if it weren’t for Bama miscues. It definitely wasn’t Florida’s best effort as they scored all of their points off turnovers. On the other hand, Bama’s D made Driskel quite uncomfortable all day long. Whatever the case, the Tide rolled over Florida again and they look like a serious national title contender.

Speaking of Jeff Driskel, there were few bright spots on Saturday. His performance did not play well to a lot of Gator fans and alums. One of them quite well known. Emmitt Smith. The former Gator and Dallas Cowboy great took to Twitter to vent his frustrations.

“Put Jeff Driskel on the bench please, I have seen enough.”

You have to wonder how Will Muschamp will handle things the rest of the way offensively. Things were supposed to be so much better this season. It looked like that was the case through two games. But, that came to a screeching halt Saturday. With many more challenging games left on the schedule, it will be interesting to see if Driskel and company can get on track. And what about the defense? What do they do after giving up 645 yards to Bama? Ouch!

Indiana 31  Missouri 27
Unlike LSU, Mizzou may not be quite what I thought they were. Could the Tigers have been looking ahead to next week’s battle at South Carolina, and looking past a dangerous Indiana team? Quite possible, but that’s no excuse. The Hoosiers were coming off a loss to Bowling Green. A team that lost to fellow Big Ten member Wisconsin 68-17 on Saturday. Indiana beat Missouri by rushing for 241 yards, despite only being 1 for 14 on third down and giving up 331 yards passing to Maty Mauk. The Tigers don’t have much time to lick their wounds. The Gamecocks are waiting in Columbia. South Carolina that is.

Auburn 20  Kansas State 14
The Tigers took a rare trip to Manhattan Kansas to play the Wildcats on Thursday night. It was easily expected that the game would be fast paced and high scoring. The game was the complete opposite. Never have the Tigers looked so out of sorts on offense since in the Gus Malzahn era. Nonetheless, Auburn escaped with the win and that’s really all that matters. There were bright spots, however. The defense held strong against a pretty potent attack led by K-State QB Jake Waters, and Nick Marshall made plays passing the ball down field. His main receiver turned out to be Duke Williams, who gives the Tigers another tall athletic receiver to team with Sammie Coates. Auburn hosts Louisiana Tech this weekend. Then, the schedule gets much tougher. Malzahn, has to feel good when his team can win while playing ugly, and seemingly answer questions about your team. All in all, a nice trip to the ‘Little Apple’.

South Carolina 48  Vandy 34 – For a while, it looked like the Commodores might pull the upset. Just as we thought the Gamecocks came out flat. But, in the end Dylan Thompson’s 3 TD passes were enough to trump two kickoff return TD’s from Vandy.

Arkansas 52  Northern Illinois 14 – The Hogs used a kickoff return TD, and a fumble return for a TD to open the game.Then, used a surprisingly balanced offensive put away the Huskies.

Texas A&M 58  SMU 6 – No problem whatsoever for the Aggies to dominate the Mustangs. Kenny Hill and company barely broke a sweat, as they piled up 663 yards of total offense. Are the Aggies for real? We’re about to find out in a tough 4-week stretch for Kevin Sumlin’s team.

Georgia 66  Troy 0 – The Dawgs took all of their frustrations of losing to South Carolina out on the Trojans. Running back Sony Michel had 155 yards rushing to lead the Bulldogs, while Heisman candidate Todd Gurley relaxed on the sideline after a brief appearance that yielded 73 yards

The SEC, especially the SEC West has dominated the polls through 4 weeks of play. Missouri bowed out of the national polls after being upset at home, and LSU took a drop after they’re loss. Still, 8 (4 in top 10. All SEC West) teams remain in the rankings as Mississippi State jumped all the way to number 14. But, how do these teams rank against each other right now? This is my take.

1. Auburn – Tigers reclaim top spot. Win at K-State was still impressive, and the win over Arkansas looks better and better.

2. Texas A&M – Aggies had most impressive win until MSU beat LSU. Still, an impressive start to the season.

3. Alabama – The Tide impressed vs Florida. After off week schedule amps up big time. But, at least QB battle seems settled.

4. Mississippi State – The Bulldogs win at LSU was epic. Dak Prescott gives Bulldogs legit shot to make it to Atlanta.

5. Ole Miss – Rebels keep quietly chugging along. Things will be quite noisy on The Grove next week, however. Bama week.

6. South Carolina – The Gamecocks carry the SEC East banner for now. Will they blow it?

7. Georgia – Still think the Dawgs are best team in east. Nothing else they can do now but keep winning and hope for best.

8. Arkansas – The Hogs running game gives them a chance to beat anyone. Can Brandon Allen amp up the passing game?

9. LSU – MSU exposed the Tigers Saturday night. Les Miles may have his biggest coaching job since he’s been in Baton Rouge.

10. Florida – We may know even less about the Gators after they’re loss to Bama. Right now, the Gators look like 7-8 win team.

11. Missouri – The Tigers schedule still sets up pretty well for them to be in east mix. Loss to Indiana was very alarming, though.

12. Tennessee – Could the Vols be a spoiler? Don’t think they’re good enough to contend, but they’ll likely surprise someone.

13. Kentucky – Same goes for the Wildcats. They should have won in The Swamp. Wildcats will be hard out for a contender.

14. Vanderbilt – Same can’t be said for the ‘Dores. Derek Mason has his work cut out for him in Nashville.

Would like to give the honor to just one, but how can you not honor both of these guys and the performances they put on in big victories on Saturday.

Prescott, went 15-24 for 268 yards passing. He also went for 105 rushing with 3 TD’s( 2 passing 1 rush). It wasn’t only his stats that stood out. It was his overall leadership and the way he controlled the game. Then, to have that performance in Death Valley was the icing on the cake.

Sims, had one of the best days an Alabama QB has ever had in going 23-33 for a whopping 445 yards and 4 TD’s. He also showed he has some wheels gaining 39 yards on the ground. Blake Sims, in the win cemented his status as starting QB of the Crimson Tide.