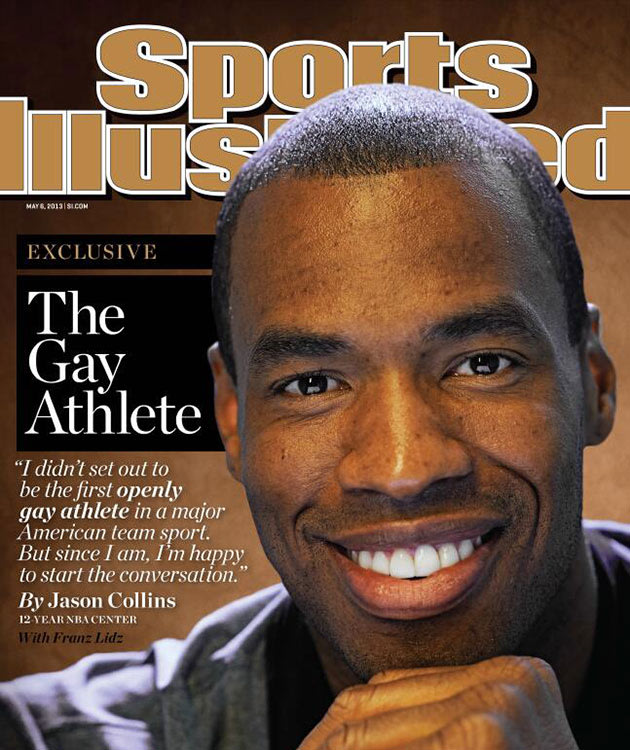 “You never really understand a person until you consider things from his point of view…. until you climb into his skin and walk around in it.”

That is a famous quote from the classic novel “To Kill a Mockingbird.” I thought it was perfect to start this article with because after I read and heard the comments on Twitter or ESPN, people aren’t putting themselves in Jason Collins shoes.

On Monday, Collins became the first active player in the four major North American sports to announce that he was gay. Many NBA players sent messages to Collins after the story was posted, and even the President of the United States, Barack Obama called Collins to offer his support. So if the president can offer his support, than why can’t you?

It took a lot for Collins to come out publicly since he still has aspirations of playing in the NBA next season. For people like Tim Brando, who I’m normally a fan of to say ignorant comments  such as the only came out for celebrity status is just completely wrong. Brando also went on to say that Collins isn’t a “Hero,” and Dan Patrick, who I’m also a big fan of, echoed a similar tone.

The word hero comes in many definitions. Just because Collins isn’t a hero to you or I, doesn’t mean he isn’t to someone in this world. There have been so many gay black men in this country that have killed themselves or been killed just because people have found out their sexual orientation.

Marco McMillian was looking to become the first openly gay man to run for office in Mississippi. On Feb. 27 in Coahoma County, sheriff’s deputies found McMillian’s body naked, burned and beaten close to the Mississippi River. Reports are McMillian was murdered because of his sexual orientation. This story while hasn’t gotten the mainstream press as it should, but is a big deal in Mississippi.

So you may ask, what does this have to do with Collins? There is still a segment of the population that has a negative view about gays and lesbians. There have been thousands of gays and lesbians who have died because they were bullied and ridiculed by classmates, teachers, work colleagues, etc. Just remember that before you get on Twitter or Facebook and write your ignorant articles saying why does this matter?

Chris Broussard, who is one of the worst NBA personalities on the planet, add his opinion to Outside the Lines on Monday. “I’m a Christian. I don’t agree with homosexuality,” Broussard said. “I think it’s a sin, as I think all sex outside of marriage between a man and a woman is.” He also added “If you’re openly living in unrepentant sin … that’s walking in open rebellion to God and to Jesus Christ.”

Now I’m not saying Broussard isn’t entitled to his opinion, but I have two problems with his statements. First, he is rating the homosexuality sin about any other sin. We all sin and that’s why Jesus died for us. I would like to ask Mr. Broussard has he ever had premarital sex or has he even simply masturbated? If he has, those are sins as well. Broussard and other people via social media are so quick to judge Collins, but how about you look at your own life? Some of the comments I saw on Twitter were from people who had many children out-of-wedlock, now you tell me who’s sinning?

My second problem with the Broussard comments are, he appears to be trying to play God. Why do you feel the need to judge what Collins does or voice your opinion? ESPN is not The 700 Club or the gospel channel, so how about you stick to sports buddy. Broussard can’t even get correct sources right, so why should I listen to him about sin and God?

If homosexuality is a sin, then let God sort it out. It isn’t your job to decide who’s going to hell and who isn’t. No one chooses to be gay and why would someone? Being a heterosexual is so much easier than being gay because it is widely more accepting  than being gay. You show me a gay or a lesbian and I will show you someone that’s been teased by family, friends and/or outsiders.

As I watched the comments on Twitter yesterday, I thought to myself this is why gay married isn’t approved in most of the states.  I’m a guy who has been baptized ever since I was seven-years-old and I can tell you I have no problem with gay married. If gays and lesbians want to be as unhappy as us heterosexuals, let them. Two of my good friends are lesbians and I could care less. At the end of the day, all I care about is what kind of friend they are to me and their character. Why does it matter what someone does in their own house and their own bedroom?

Jason Collins shouldn’t have to hide who he is anymore to the world. Good for him for coming out were my first thoughts. If you are one of the people who have said, why is this sports story, then you simply don’t understand. Hopefully there will become a time where this is a non sports story. But for now, Collins will be forever known as the first.