Emotions and opinions were obviously running high after A-Rod was hit. Joe Girardi(who was tossed for arguing after Dempster wasn’t ejected), said after the game that he wished Dempster had to hit, implying that the Yankees would have hit Dempster in retaliation. Yankees fans took to social media to call the Red Sox “classless”, while Red Sox fans (and fans of the other 29 major league teams) celebrated Dempster’s bold statement. My thoughts on the at-bat are pretty simple. I commend Ryan Dempster for standing up for what he believes in, and doling out the baseball justice he felt was necessary. This was obviously premeditated, and he did what every major league pitcher has wanted to do since they heard Rodriguez would be appealing his suspension and playing the remainder of the season. As for Girardi’s ejection, I do not think an ejection was warranted in that situation, but people are interpreting the situation wrong. I’ve heard a lot of people applauding Girardi for “sticking up for A-Rod”; that’s not why Girardi came out so quick to argue. When an umpire warns both sides after a hit by pitch, the manager of the side that got hit is going to argue every time, because that takes away the inside of the plate for the pitcher. CC Sabathia had to be careful from that point on because if he hit a Red Sox batter, intentionally or unintentionally, he would be thrown out of the game. No one in the Yankees dugout was protecting Rodriguez, they just wanted Dempster out of the game so the Red Sox would be forced to go to the bullpen early.  After the first pitch, which could have warranted a warning, I don’t necessarily blame Girardi for wanting Dempster thrown out. But as for the actual hit by pitch, there was nothing “classless” or unjustified about it; that’s baseball, and Dempster did it right, hitting Rodriguez in the ribs rather than anywhere near the head. 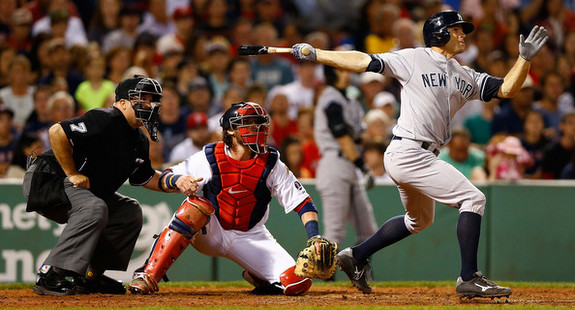