On March 20, Cincinnati Reds closer Aroldis Chapman was hit in the face with a line drive in a spring training appearance against the Kansas City Royals. As the fireballer writhed in pain and was carted off, the Cincinnati fan base and organization held its collective breath. There were so many concerns in their heads: his immediate health, his season, his career, and his long-term well-being. They hoped and prayed that the injury was not so severe that it would impact the course of Chapman’s career. After all, he had been one of the top young pitchers in baseball over the past few years, at 26 years old the best was yet to come. Would one line drive derail all of that? 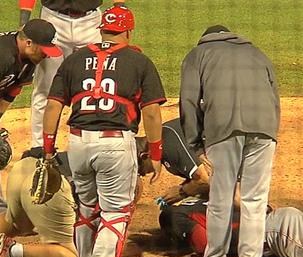 Fortunately for the Reds, Chapman would be alright. He suffered facial fractures as a result of the come-backer and was taken to a local hospital, having to undergo surgery, but he ended up making a quick recovery. On Sunday, May 11, the star closer returned to the mound nearly two months after the scary incident.

Chapman entered Sunday’s game against Colorado behind the support of his home fans, who gave the fan favorite a loud standing ovation. While it was a nice moment as he ran in from the bullpen, there was a job to do: slam the door to close out the Rockies. He quickly returned to mid-season form, bouncing back from a leadoff walk to strikeout Carlos Gonzalez on a 102 mile-per-hour fastball. Striking out Nolan Arenado on a slider, before blowing away Justin Morneau on a 101 mph heater to end the game. It was a much needed return to normalcy for Chapman, allowing him to just use his number one pitch to overcome the heart of the order to give his Reds the win. The fact that he was in the 100’s on the radar gun again calmed the nerves of the Cincinnati organization, which was most likely pacing the floor as he threw his warm-up pitches. In the end, it was a picture-perfect day for the fans at Great American Ballpark, both weather-wise and on the field.

Considering the start of the season hasn’t been all sunshine and roses for Cincy, Chapman’s return comes at the right time. The Big Red Machine finds themselves in third place in the NL Central with a record of 17-19, six games behind division leader Milwaukee. The bullpen is the second-worst in the majors, with an ERA of 4.80 and six blown saves. They needed the anchor of their bullpen back, without question.

Aroldis Chapman has more than lived up to the hype in his first three big-league seasons, but this year may be his biggest challenge yet. Psychologically, he may face a struggle when he goes to the mound after the ordeal he has been through. Physically, he has a lot of pressure on him considering the supporting cast he has in the bullpen. Both mentally and physically, 2014 will be an interesting year for one of the hardest-throwing pitchers in the history of the game.