In what had to be one of the worst slate of games ever for the league, there was still quite a bit of intrigue. At Alabama, the QB battle heated up as Jake Coker took the field. We finally got a chance to see the Florida Gators offense, and it didn’t disappoint. South Carolina’s struggles continued against undervalued East Carolina, but the Gamecocks found a way to win, and at Missouri, in what looks like a pretty weird schedule to start the season, the Tigers have actually looked quite good but probably won’t get much credit for it. The SEC as a whole will get even less credit for the weak slate of games last weekend. But, any rate let’s review Week 2 in the SEC…

Missouri 49 Toledo 24 – Missouri is probably not going to take as big a step backward as many think. One glance at the Tigers first two games won’t look very impressive. But, looks can be deceiving. In week one, the Tigers beat South Dakota State. So, what’s the big deal? The Jackrabbits of the FCS were a playoff team last season. We’ve seen just how dangerous those type teams are. You don’t have to believe me. Just ask Kansas State, who lost to 3-time defending FCS champion North Dakota State last season. Or, Iowa State who just lost to NDSU last week. The games wasn’t close. Just ask Michigan, who lost to Appalachian State a few years ago at the ‘Big House’. FCS teams that have playoff experience are very dangerous. Then, there’s Toledo on the schedule in week two. No problem. Right? Well, usually games against a team from the MAC, like Toledo, would automatically be a home game for an SEC team. Mizzou travelled to Toledo. The Rockets, are another team that won’t get much attention, but a game in hostile territory against a team full of players that feel they have something to prove can be dangerous as well. The Tigers passed with flying colors winning 49-24. Maty Mauk went over 300 yards passing for the game, and the Tigers dominated the way a superior team should. Don’t get me wrong. Toledo and South Dakota State are far from being SEC competition. But, the Tigers took care of business and may have learned more about their football team than some others who played lesser competition. Look out for the Tigers in SEC play.

Alabama 41 – Florida Atlantic 0 – The Alabama QB battle may last a lot longer than we thought. Blake Sims continued to look good, except for one play. A bad exchange between he and TJ Yeldon, that resulted in a lost fumble. Sims, went 11-13 for 228 yards and 2 TD’s. Jacob Coker, finally had some real action, and for the most part he didn’t disappoint. Coker, who also went for over 200 yards passing, showed off his arm a lot more than Sims has in the first two games. Coker, has been known for his big arm and he did hook up with Amari Cooper on a deep ball in the 2nd half. Sims, has been more reliant on the short passing game. If nothing else, we really saw why Nick Saban and Lane Kiffin have been unable to decide on one QB. Coker, has the better skill set than Sims, but he’s far behind in managing the team. That will come with time, but will it be too late for Coker to pass Sims this season? Maybe. If Coker does not take over, is Sims good enough for Bama to be a serious national title contender? Maybe. That’s the dilemma Saban and Kiffin are faced with. Look for this battle to last a lot longer than expected. Maybe, even all season. 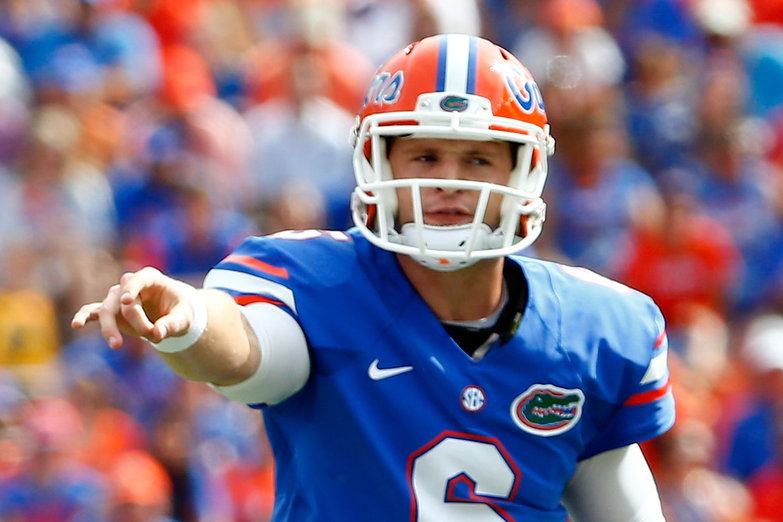 Florida 65  Eastern Michigan 0 – After not playing last week, when their game was suspended due to thunderstorms, the anticipation was enormous to see what Florida’s offense would look like. Jeff Driskel, went 31-45 for 248 yards and a TD. Driskel, spread the ball around, but Quinton Dunbar and Demarcus Robinson were the main recipients of his passes. Both combined for over 200 yards receiving. Robinson, had the TD reception. It’s still too early to tell whether or not the Gators have improved offensively when the competition is Eastern Michigan. However, the Gators have struggled with similar teams the past couple of seasons. So, there is hope when 65 points are put on the scoreboard. It can’t be overstated enough, how dangerous the Gators can be if their offense clicks at all. It won’t take an offensive explosion with that defense. Just Driskel and company to be consistent.

South Carolina 33 East Carolina 23 – This game figured to be a lot tougher than some may have expected it to be for the Gamecocks. And that’s exactly what happened. After seeing Texas A&M’s Kenny Hill torch the Gamcocks secondary for over 511 yards in week one, ECU QB, Shane Carden went for 321 on Saturday night. Carden, was picked off twice which ultimately helped South Carolina secure the win, but there are major questions about the Gamecocks defense. Not good when you have SEC East rival Georgia coming to Columbia this weekend. Dylan Thompson, had a solid game. He had one interception, but he went for 269 yards and a TD also. Mike Davis, looked a lot better than his 15 yard effort in week one. Davis, went for 101 yards on 18 carries. A good win for the Gamecocks, but there has to be a lot of concern over the defense.

Rest of the SEC:

Auburn 59  San Jose State 13 – Tigers blow out SJSU behind Cameron Artis-Payne and his 112 yards rushing and 3 TD’s.  Next up: Idle

LSU 56  Sam Houston State 0 – Anthony Jennings and Travin Dural hooked up for 3 TD’s, one for 94 yards, in route to the rout over SHSU. Next up: vs Louisiana-Monroe

Cooper’s 13 receptions tied the school record for receptions in a game, held by DJ Hall. He now has 25 receptions in two games, which leads the nation. He also had 189 yards receiving. It’s  hard to see Cooper keeping up this pace,  but what a security blanket he’s been for Blake Sims. We’ll check in on Amari Cooper as Bama gets ready to face Southern Miss on Saturday, and the rest of the SEC to preview Week 3 later in the week.