The worst thing about college football is the short length of the season. It’s always here and gone in a flash. We’re already at the midway point of what has been an incredible season in the SEC and around the nation. With it being the midway point of the season, it seems only right to hand out a few honors for excellence on the field so far this season. So, before we get into this week’s action, let’s give out a few SEC mid-season honors .

Best Offensive Player:  Dak Prescott (QB – Miss St.) The Bulldogs Junior QB has the nation buzzing over his performances. So much so, that he is the current Heisman front-runner. Of course, Todd Gurley would have been here if not for his absence, and Bo Wallace has been solid. But, Prescott has been special.

Best Newcomer:  Josh Reynolds (WR – Texas A&M)  He leads the SEC with eight touchdown receptions, and is in the top 10 in receptions and yards. There are others worthy of this honor. Auburn’s Duke Williams and Tennessee’s Jalen Hurd come to mind. But, Reynolds has been solid for the Aggies.

Coach of the Year:  Dan Mullen (Miss St.)  We’ll give the nod to Mullen over a guy like Mark Stoops because MSU is number one in the nation and very much a candidate to win the national championship. We knew the Bulldogs would be improved. Few, if any saw all of this coming. Patience with Mullen had worn pretty thin before the season. I’m thinking that’s not an issue now.

There you have it. Should be interesting to see if these players remain at the top, or if someone else come along and makes a name for himself by season’s end. Now, onto this week’s action.

Bama’s offense has been stuck in neutral pretty much since a 2nd quarter TD against Ole Miss. The Tide offense has only scored 24 points the last two weeks. Center, Ryan Kelly and running back Kenyan Drake’s injuries are big reasons for that. But, Bama will likely have to find a way to score some points against A&M. The honeymoon for Blake Sims is officially over. Already, some fans are calling for Jake Coker and calling out Nick Saban for keeping Sims on the field. I don’t get that sentiment. Sims, had his worst game last week against Arkansas, but the offensive woes are not all on him. I’ve also got to think if Saban thought Coker was ready, he’d be playing.

For Texas A&M, there have been some offensive struggles as well. The Aggies just don’t look the same. Their pace isn’t as fast and talk of Kenny ‘Trill’ Hill winning the Heisman are long gone. The defense has also been out of wack. On one hand, playing Alabama may be just what this team needs. Questions in Bama’s secondary and an anemic offense as of late. On the other hand, A&M may be what Bama needs to get on track. The Tide will look to get off to a better start than they have in the previous two meetings. A&M, has a 34-7 scoring advantage in the first quarter of those games. The matchup is pretty good for both teams, but in the end:  Bama 34  A&M 24

Patrick Towles and the Wildcats have been quite the surprise in the SEC so far this season. They come into this game 5-1 and with a ton of confidence. These aren’t your Grandma or Grandpa’s set of Wildcats under head coach, Mark Stoops. He has done an outstanding job. No longer can you look at your schedule and just pencil in a W next to Kentucky’s name. The Wildcats almost got the job done at ‘The Swamp’ a few weeks ago. Can they close the deal at ‘Death Valley’? I think they can. But, now that will have to be done against an LSU team that looks a lot better and has a ton of confidence in their own right.

Super freshman, Leonard Fournette is finally making his presence felt and the Tigers defense was much better last week. Albeit against an offensively challenged Florida team. I have no dog in this fight, but it would be nice to see UK win this one. Not for the upset. But, to set up a very interesting game next week when Miss State comes to Lexington. By the way, kudos to CBS for making that game the SEC game of the week, next week! But for this game, I would be pretty surprised if the Cats aren’t in this game throughout. However, it seems like LSU and Les Miles may be gaining their stride at the right time.  LSU 30  Kentucky 23 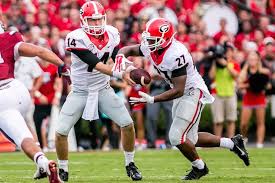 I could not have come away more impressed with Georgia last weekend, or more unimpressed with Missouri. But, you have to give Mark Richt and his coaching staff a lot of credit for getting his team focused on the matter at hand and not on losing Todd Gurley. However, you have to wonder if Gurley’s absence wasn’t a blessing in disguise for Hutson Mason. The Georgia QB, had maybe his best game. Maybe, just maybe knowing Gurley wouldn’t be there to save the day made the difference. It shows just how talented the Dawgs’ really are.

However, going to Little Rock to face the Hogs won’t be easy. As focused as Georgia seemed to be, Mizzou look to have lost it’s focus after hearing Gurley wouldn’t play. The Tigers have been up and down all season anyway. Arkansas, is still winless in SEC play over the last couple of years. They came oh so close against Bama last week. The Razorbacks are a much better team than they’re given credit for being. I think that’s true on both sides of the ball. They’re still one-dimensional on offense, but they have players on defense now. I also think it will be tough for Georgia to be as focused as they were last week at Columbia. At some point the Hogs SEC losing streak has to come to an end. It nearly happened last week. I think this week is that time in what could be the game of the day.      Arkansas 23  Georgia 20

In other SEC action:

Missouri  at  Florida (-5.5)  What a damaging loss for the Gators last week to LSU. A game they should have won. The Gators haven’t played well at The Swamp in two SEC games. Mizzou, is coming off their head-scratcher of a performance last week. Both teams should be focused for this game, which could still be huge in deciding the East champion. This game is hard to call, but I’ll go with the Gators.  Florida 27  Mizzou 20.

Tennessee  at  Ole Miss (-16.0)  This looked like a danger game for the Rebels at one point, and still may be. Sandwiched in between what possibly could have been the two biggest wins in school history and a visit from Auburn next week, it would be easy to see Hugh Freeze’s team have a letdown this week. The Vols are so young up front on both sides of the ball, it just doesn’t seem likely they can pull the upset. Don’t be surprised if they hang around a while though.  Ole Miss 34  Tennessee 14

Furman  at  South Carolina (-)  It seems like many moons ago when the Gamecocks beat Georgia. SO much has changed since then. Should be a pretty easy win today though.    South Carolina 41  Furman 13