While, we were treated to some pretty good action in Week 5, this is the week all SEC fans and others across the country have been waiting for. Last week,  we saw Arkansas give Texas A&M all they could handle. We also saw Mizzou rebound and beat the Gamecocks. But, that was only an appetizer to this week’s feast. Let’s take a look at all of the Week 6 action around The SEC which includes 3 matchups of top 15 teams. All from the SEC West!

The marquee game of the day takes place on ‘The Grove’ in Oxford. This is the type of game that some Ole Miss fans have waited their entire life for. A top 10 matchup with ESPN Gameday on hand for the first time. It’s going to be special.

The key to this game lies with the quarterbacks. On one hand, you have Blake Sims making his first road start. It being against maybe the SEC’s best defense and almost certainly the leagues best set of safeties (Tony Conner and Code Prewitt) makes it even more challenging. I think those guys have a good shot at finally slowing down Amari Cooper.

On the other hand, you have Bo Wallace who’s experienced, but is at times careless with the ball. If Bama can get pressure on Wallace it might take away another advantage for the Rebs. LaQuan Treadwell. He represents everything the Tide has had true with the last couple of years. A tall, physical receiver that runs well. Getting pressure from their front line will be important.
I think both teams will turn the ball over, but the team that stays away from the big turnovers will probably win.
In the end, I think Bama’s balance is too much for the Rebels.

Look for both teams to score some points, but while a good game from Sims will be vital, Bama has the better running game. They also have a few more weapons than do the Rebels. That’s not to mention the fact that Ole Miss isn’t as used to big stages as are the Tide. With some lackluster performances leading into this game, you have to figure Ole Miss has had this game circled for a while? Will that hurt? Not sure. But, it should be a whale of a game.  Alabama 30  Ole Miss 24

This game will probably come down to the Aggies run defense and the Bulldogs pass defense. The unit that has the better game will likely be the winner. A&M didn’t do too bad against Arkansas’ rushing attack last week, but you have to wonder if they can hold up for 4 quarters against two physical running attacks in as many weeks. The Aggies look to be much improved defensively but that is a tall order. The Bulldogs also have Dak Prescott, who may be the best QB in the SEC and a pretty good receiving Corp. State is very balanced. One thing to keep an eye on will be the center/QB exchange for the Bulldogs.

For the Aggies, it’s Kenny ‘Trill’  Hill and Kevin Sumlin’s frenetic offense. A&M is going to score some points. The Bulldogs have struggled stopping the pass game against teams like UAB. The Aggies will be a bit of a step up from that. But, if the Bulldogs control the ball with long sustained drives. The Aggies may not get the ball enough. State is also very strong up front defensively. If they’re able to get penetration with their front 4, it will help their secondary. Easier said than done however, against a strong Aggies offensive line.

This should be another superb game. Quite possibly the game of the day. But, in the end the Bulldogs get it done in a shootout………. Miss St. 44  Texas A&M 41 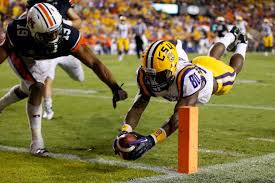 In the battle of the Tigers, Auburn looks to avenge their only loss of 2013. Brandon Harris makes his first start at QB for LSU. Harris, takes over for Anthony Jennings who had been pretty ineffective. Harris, looks like he should have been the choice from day one. But, this looks to be to tall a task for the freshman. However, head coach Les Miles has shined many times in situations like this. You can bet he’ll have the Tigers ready to play. The key for LSU winning this game is to find a way to control the clock and the trenches the way Kansas State did. LSU, is much more talented than K-State, but also a lot less experienced. While, I think Miles may have something up his sleeve, executing it is another story.

For Auburn, it’s been a so-so start to the season. Their running game is performing well below where they were last season, but it’s likely due to  losing a couple of their mainstays up front to the NFL Draft. It may also be that the Tigers haven’t been quite as focused coming out of the gate. Not surprising for a team that came up just short of winning the national title. Something tells me Auburn gets it going against LSU. The Tigers had problems stopping Mississippi State which runs a simlar offense with Dak Prescott, that Auburn runs with Nick Marshall. It’s a spread attack, but both are very physical. LSU, also gave up some big plays in the passing game to Mississippi State. Marshall, isn’t the most accurate passer. But, I like the weapons he has on the outside. Sammie Coates and Duke Williams are big receivers that have a lot of speed. The youngsters for LSU will have a hard time covering them. Especially, if Auburn’s run game is working.

This is still one of the best rivalries in the SEC. But, it’s pretty obvious the Tigers have taken a few steps back from the national title contender they’ve been over the years. Look for Auburn to take advantage of that…………….Auburn 34  LSU 23 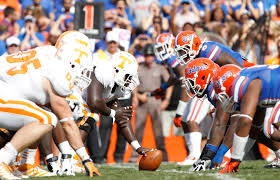 This rivalry used to be the best the SEC had to offer. It was must see tv when these two hooked up. Wow, how things have changed. It’s at best the fourth best game of the day. But, that doesn’t mean it doesn’t mean a lot to these two clubs. It’s also huge in the SEC East race. This is defintitely a turning point game for both teams. If Florida is to take the next step toward being an elite program like they once where, beating teams like Tennessee is  a must. Same goes for the Vols. This is the type game you have to win at home to take the next step toward being a team that can contend.

The Gators are the more talented team. But, I’ve been very impressed with how these young Volunteers have handled themselves so far. Butch Jones, is doing an incredible job as it’s easy to see the players are buying into what he’s selling. I don’t know if you can say that about Will Muschamp and Florida.

For Florida to win, of course Jeff Driskel has to play well and stay away from turnovers. He also has to do a better job at getting the ball to Demarcus Robinson. He had only two catches in the loss at Alabama. That won’t cut it against the Vols either. Besides Robinson, who do the Gators have that could be labled a playmaker? That’s a problem.

Another problem is Tennessse’s Justin Worley will be the best QB on the field. In fact, Worley is looking like one of the best QB’s in the SEC. He has plenty of weapons to throw to, and Jalen Hurd  is a force to be reckoned with. Both Hurd and Worley had good games and the Vols nearly pulled off the upset over Georgia. If they have that kind of effort Saturday, look for the Vols to win. ………………..Tennessee 27  Florida 19

In other SEC action:

The Gamecocks have been quite the unstable team so far this season. Losses at home to Texas A&M and Missouri. A win at home over Georgia. Now, comes a tough road trip to Lexington to face a Wildcats team that’s pretty confident and looking for a signature win. Steve Spurrier’s team has yet to establish an identity. We thought they would be a team that would feature Mike Davis and the power running game. But, it hasn’t been that way. Dylan Thompson has played ok at QB, but the Gamecocks have to get back to what they do best. Kentucky, is still waiting for that signature win. QB, Patrick Towles gives them a great shot to get it against South Carolina, but I think they wait a little longer. Should be a tight game though.  South Carolina 29  Kentucky 27

It’s been a tough, tough season for the Commodores. That doesn’t look to change with their trip to Athens. Everything is still attainable for the Dawgs and they’re looking to get some of their injured players back, including Malcolm Mitchell. I don’t see them having a let down against Vandy………………….Georgia 44  Vandy 13