Week 11 brings us only six games involving teams from the SEC. Three of those games are in-conference battles, highlighted by one of the hottest rivalries in college football. Alabama at LSU. But, before we get into Week 11, lets take a look back at the crazy action in Week 10, where one coach may have saved his job with a huge unexpected win over a rival, another coach and his team finally delivered a victory that may be looked at as a turning point in his coaching tenure and the recent history of the program, and number 3 Auburn defeated then number 4, Ole Miss in a thriller.

In their first seven games, and most notably the Alabama game, the Ole Miss Rebels have been the team that’s made the most plays when they counted. In their last two games, things have been quite different. Against LSU, it was the Rebels failing to deliver in a potential game winning drive. That was immediately after LSU went the length of the field to take the lead.

Against Auburn, it was a fumble by Bo Wallace on one drive, and a fumble at the goal line by Laquon Treadwell on the game’s final drive. That play left Treadwell with a terrible season ending injury. The play made by Auburn’s Kris Frost gave the Tigers a huge win and kept their playoff chances alive and well. 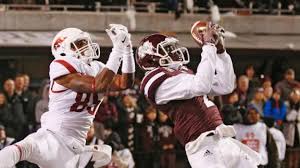 Another team keeping their playoff chances alive was No. 1 Mississippi State. The Bulldogs beat Arkansas 17-10. The win wasn’t very impressive, but right now it’s about survive and advance. The Razorbacks could have easily won the game, or sent it to overtime. However, the Bulldogs made just enough plays to win including the interception in the endzone, to turn away the Hogs with only seconds remaining in the game. Quarterback, Dak Prescott not being 100% healthy is looking more and more concerning with huge games still left on the schedule.

Crazy Day in the SEC East

What an incredible win for the Florida Gators. But, more importantly what a win for Will Muschamp. But, is beating Georgia enough for him to keep his job, and can the Gators build off of this win and salvage their season?

What does the loss mean for Georgia coach Mark Richt? It’s another loss that leaves Georgia fans frustrated and scratching their heads. The Bulldogs, simply didn’t look ready to play. How else do you explain Florida pounding the Bulldogs D for 418 yards rushing, while attempting only 6 passes all day for 27 yards? You’d think there would be some type of adjustment. But, shockingly there wasn’t.

Georgia, looked like a sure bet to win the east. They were also called the favorite to win the national title just last week in Las Vegas. So much for that. Missouri, who beat Kentucky 20-10, now controls their own destiny to repeat as East champs. Who woulda thunk that?

Tennessee coach, Butch Jones has shown signs of being the man for the job in Knoxville. But, he didn’t have much to show for that record wise. That changed Saturday night with the Vols 45-42 victory over South Carolina. It’s still probably not the signature win most Big Orange fans want, but it’s a step in the right direction. The Vols made plays down the stretch to mount an impressive comeback, and made plays in overtime to seal the deal. That’s something to be excited about. So, is the emergence of Vol QB, Josh Dobbs. Where has he been hiding? Another crazy week in the SEC. Now, let’s move on to Week 11. 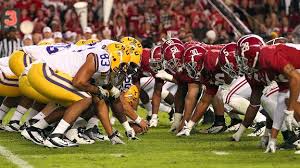 The stakes are usually very high when these two meet, and this season is no exception. Obviously, there’s a little bit more on the line for the Tide, but LSU has seemed to enjoy their role as spoiler. There is still a chance the Tigers could win the West, but they would need a lot of help. For LSU to beat Bama their running game has to continue to be productive. Leonard Fournette and company have been great. However, against a good defense like Alabama’s, quarterback Anthony Jennings must also make plays in the passing game.The biggest question mark of the Alabama D is still the secondary. So, big plays can be had.

The Tide would love to make LSU one-dimensional. For the most part, the Tigers have been just that. But, if Bama’s front seven can’t control LSU’s run, explosive plays off of play-action could hurt. Offensively, quarterback Blake Sims needs to get off to a quick start. So, does Amari Cooper. When that combination has performed well early, the Tide has been hard to handle. Bama’s offense has had it’s struggles on the road. This road test will be as tough or tougher than Ole Miss. A game they lost.

On paper, Bama looks like the better team. They at least look like the more complete team. But, this is Baton Rouge. At night. In 2010, Bama lost to LSU in eerily similar situation. The Tide came in ranked No. 5, a 6.5 point favorite and with only one loss. The Tigers were also pretty much out of the SEC West race. The Tigers won that game. On the flip side of that, no one has had the success that Alabama has had in Tiger Stadium. In fact, in the last 44 meetings between the two, the road team has won 29 times. A good bit of that has been Bama winning in Baton Rouge. Look for the Tide to make that 30 times in the last 45 games, but just barely. Another classic. Alabama 23 LSU 17

This game at one time looked like it could be the game decide the SEC West. That’s long gone now for A&M. But, everything is very much in play for Auburn. The Aggies have had problems all over the place, defensively. It’s hard for me to believe that they’ll have any success stopping Auburn. It will be interesting to see if the Aggies can score a few points, though. Auburn’s D has looked vulnerable at times. Still, the Tigers should have no problems in this one.  Auburn 52  Texas A&M 24

This one could be interesting. The Wildcats are coming off a disappointing loss to Missouri. Georgia, is coming off a devastating loss to  Florida. The team that puts last week behind them will probably prevail. As good a job Nick Chubb has done filling in for Todd Gurley, the Dawgs are still very one-dimensional. Kentucky, is at home and probably have enough to give Georgia a second straight loss.  Kentucky 33 Georgia 27.

Florida 30 Vandy 17 –  All of a sudden, the Gators have a chance to win the east again. Now, they have forget last week’s success and focus on the Commodores. Easier said than done.

Should be another incredible week of SEC football…………..