May the Fourth be with you. Here are today’s Thoughts of the Day.

The news broke Sunday night that Warriors guard Stephen Curry was announced the NBA Most Valuable Player. He received the award today and will be honored before Tuesday night’s playoff game against the Grizzlies. Rockets guard James Harden and Thunder guard Russell Westbrook had incredible seasons, but Curry was simply the best choice after being the best player on the best team all season.

Golden State has won 17 more games than they did last season, and much of that improvement has to do with their star point guard making everyone better. Curry scored or assisted on 38 percent of the Warriors’ baskets, about two percent less than Harden did for Houston, but his effective field goal percentage (which values three-point field goals 50 percent more than two-pointers) is 59.1 percent, about eight points higher than Harden’s 51.2 percent mark.

Harden supporters claimed that he should have won MVP because he had a less talented team around him. First off, is that really true? While payrolls are certainly not the only indicator of talent, Houston’s payroll is only $939,072 less than Golden State’s. Four Warriors have been All-Stars, two more than the Rockets. There isn’t that much of a disparity between the two teams.

Even if there was a clear difference in talent level, even if the Warriors are more talented than their Western counterparts, is that Steph Curry’s fault? The blame for that would have to fall on Houston GM Daryl Morey’s shoulders for not building an adequate roster. Harden will take home the honor sometime in his career, but you can’t detract from what Curry has accomplished this year.

Things got chippy at Fenway Park on Sunday night. Red Sox outfielder Hanley Ramirez was visibly upset after being plunked by Yankees pitcher Adam Warren, then Yankees outfielder Jacoby Ellsbury was plunked in the eighth. Ellsbury took some subtle shots at his former team after the game.

“Maybe they didn’t want me to get another hit… he’s just lucky I didn’t steal two bases off him” he said, according to NESN.

I’m all for the subtle jabs; the refueling of the rivalry should be something to be excited about if you’re a Boston or New York fan. From Dempster intentionally hitting A-Rod a few years ago, to Ellsbury switching sides in the 2013 offseason, to the latest flareup, the teams are starting to ratchet up the intensity again.

It’s not 2003 and 2004 again, when the rivalry was at its peak, but the Yanks and Sox are starting to hate each other again, and fans who remember those venomous battles around a decade ago can surely appreciate that. 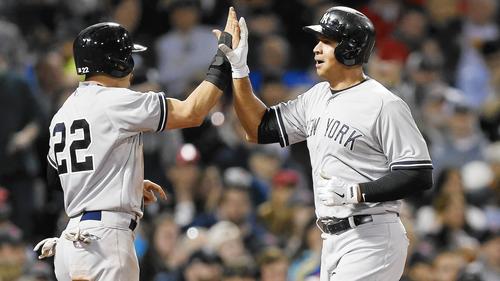 The Mayweather-Pacquiao fight didn’t have a prayer at living up to the hype. They should have fought five years ago.

Is there a better announcer in sports than NBC’s Doc Emrick? He makes the games so enjoyable to watch.

Doesn’t everyone root for the triple crown in horse racing? American Pharaoh has a formidable shot.

Jameis Winston’s crab legs Instagram picture was funny, but I don’t blame the Buccaneers for wanting it deleted.

Patrick Kane is such a special player. He even made an empty-netter look like a Top 10 nominee on Sunday.

You know how the saying goes: “How ’bout them Astros?” Wait… what?